Like many other fragments of information that trickle out of the black box of China’s leadership, the new usage of the term “hexin” could mean several different—opposing—things.

This article reflects the personal views of the author and not necessarily the views of the U.S. Government or the Department of State.

A new turn of phrase …

A sudden, novel use of the term “核心” (hexin, or “core” in English) to describe General Secretary Xi Jinping generated a stir in China-watcher circles recently.  The new use appeared early in 2016, as dozens of municipal and provincial cadres employed the novel phrase (坚决维护习近平总书记这个核心, or “resolutely safeguard the core, General Secretary Xi Jinping”) in successive rounds of meetings.  The actual phrase, as described in the graphic below, is slightly but notably different from previous uses of hexin to talk about China’s General Secretary.

Importantly, the central propaganda apparatus has not yet given the phrase a public stamp of approval, such as including it in central Party documents or in original reporting from authoritative PRC media outlets.  Yet, it is reasonable to assume that the rollout of the new phrase was coordinated in some fashion, since it was repeated verbatim in a rapid succession of a large number of sub-national meetings. But it remains unclear where exactly—or why—the phrase was generated.

… and several ways to interpret it

Beijing does not generally introduce such shifts in phrasing willy-nilly, particularly when discussing the central leadership.  So if this new term is a signal of changed leadership politics or priorities, what does it mean?  Two common explanations use the same phrase to buttress opposing theories:

The fact that China watchers use this piece of evidence to support contradictory narratives means that additional information will be needed for a correct interpretation, and perhaps will be provided by authoritative outlets in the coming months.   Whatever the ultimate origin of new phrase, it is a reminder that, because of our limited insight into Zhongnanhai, we should remain cautious about rushing to interpret official signals – especially ones that can be used to support opposing theories.

In the meantime, we should also ask ourselves which leadership precedent we are focusing on. Much of the commentary surrounding the new phrase focuses on the use of hexin (“core”) as a way for Xi to put himself on equal footing with Deng Xiaoping (either as a means of self-aggrandizement or as a way of papering over leadership weaknesses).  Yet, the word hexin was initially used to describe Jiang Zemin.  It was only later retroactively applied to Deng and Mao Zedong.

In contrast, the word hexin largely fell out of use during the Hu Jintao administration.  Hexin was used very occasionally in Party-affiliated media, but in general, the central leadership under Hu was referred to as以胡锦涛同志为总书记的党中央, or “the Central Committee with Comrade Hu Jintao as General Secretary.”  And, in many cases, authoritative PRC media still use that same phrase to describe Xi. 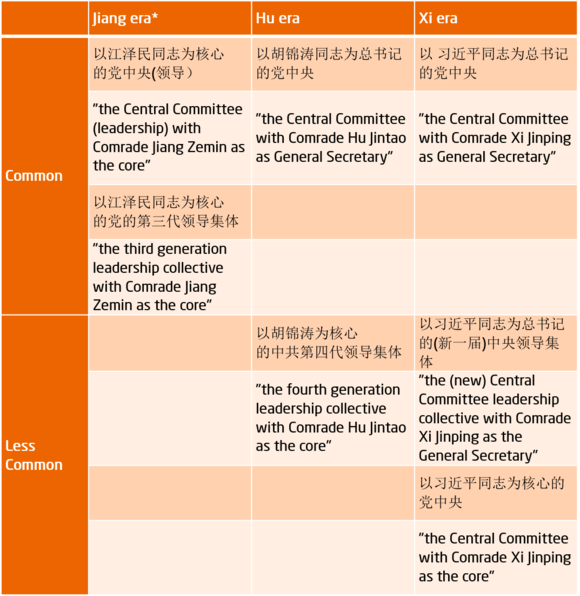 *These turns of phrase were also used retroactively to describe Mao and Deng and continued to be used for these three leaders during Hu’s tenure.

Therefore, the reintroduction of the word hexin in this new phrase may signal a desire to return to pre-Hu precedent, attempting to reassert the General Secretary’s position as a strong leader and a centre of gravity for the country.  In terms of leadership propaganda, this would make Hu Jintao the exception, not Xi Jinping.